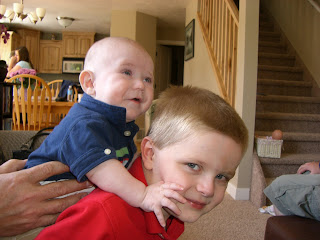 This weekend marked Brendan's first Memorial Day weekend celebration. It began with a visit from the the Near grandparents. Grandma and Grandpa gave Brendan perhaps the noisiest book ever made. It has a squeaky toy built into it and the pages are made of the crinkliest, loudest plastic known to man. As no surprise Brendan loves it. On several occasions he has tried to fit the entire book into his mouth, but to no avail.

Saturday the Near families and Gilchrists got together for some golf and some barbecue. The golf went well enough. I discovered that my Dad had given me the most un-hittable driver ever developed. When I used Johnny-B's driver I actually hit pretty well, but not well enough to beat anyone else in the group. Dad, Aarron, and Johnny-B all played pretty well. However, due to some scoring discrepancies I'm not sure who really won. Let's just say we're all winners and leave it at that. Of course, if we were to have a rematch I'm sure I would win.

So while we were golfing the ladies and kids (Valerie,Brendan,Mom, Carrie, Erin, Spencer, Leila, and Murray) were hanging out at Carrie's home preparing a delicious meal. The meal consisted of potato salad, barbecue chicken, taco salad, fruit salad, and two pies. We supplied the Cactus Cooler which was also delicious. Carrie also shared some cherry chip cookies which have always been a family favorite.

So Brendan enjoyed his time with his cousins, aunts, uncles, and grandparents. He drooled on everyone a fair amount, but otherwise behave himself quite well. Some new things he's doing include: louder burps, rolling on his side, spitting lots of bubbles, going to sleep un-swaddled and on his own, and eating large amounts of rice cereal. Valerie starts her yoga classes this week and Brendan has told me that he might be interested in attending as well. He's a little self conscious about his figure and thinks that a weekly workout would do him some good. If that's what he wants to do, then we support him 100%. It's either yoga or karate with his cousin Spencer. We'll see what happens. Until then, we hope everyone out there has a good week.

-Peace to your mothers.
Posted by Valerie at 6:32 PM No comments:

Chris and I decided that it was about time that we stop swaddling Brendan when he sleeps. We were a little hesitant (mostly me) since when we tried about a month ago, we had a horrible night. None of us slept well at all. Luckily, this time around Brendan has adjusted well and is still sleeping great. He wakes up a couple of times during the night but I think as he gets more used to waking up and being able to move, he'll learn to put himself back to sleep and return to his one night-feeding only. As you can see from the video below, he is still all smiles- so he must like being free from his swaddling!

Posted by Valerie at 8:09 PM No comments: 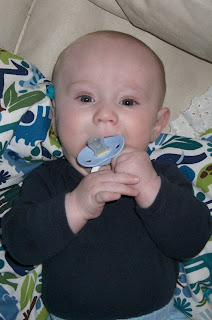 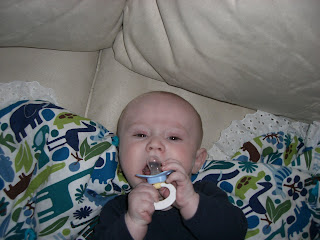 This really is a game to Brendan. As soon as I put in his pacifier, he'll grab hold of it, yank it out and proceed to try to get it back in.
About half of the time, he will actually succeed in getting it back in his mouth but most of those times it's upside-down, sideways or just under his lip (not actually in his mouth). But even if he gets it in the right way, he'll just pop it back out. At first, I thought he didn't understand how to let it go once he got it in... but he can if he wants. He just doesn't want to usually. It's more fun to play with it and now throw it. Fun for him, not always me. He cracks me up though!
Posted by Valerie at 9:27 AM No comments: 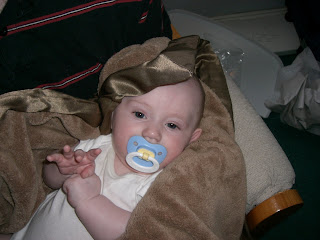 This past week, Brendan has been as sweet as ever so I thought I would dedicate this post to all the things I love most about him. Well, not all the things since I couldn't even begin to name ALL of them but just few highlights from his past week.

10. He saves his poops for his dad while I'm at work. I don't know why but he always waits for the afternoons when it's just him and Chris. I haven't changed a poopy diaper in quite a while (which is REALLY nice since Brendan can poop)!

9. He puts everything in his mouth. I know this will get scary once he can move around on his own, but for now, it's so cute. He especially loves putting Chris's hand in his mouth.

8. He pulls his cow toy on his bouncer that plays music about 50 times a day. This actually gets a little annoying after a while since it plays "Old McDonald" but it's just so cute. He's actually trying to pull the handle into his mouth which is why it plays over and over and over.

7. He can sit up almost all by himself, but he still needs help. I can't believe my little boy is almost sitting!

6. He loves his butterfly rattle/toy. He LOVES to suck on the antennas and once he grabs on to it, he doesn't want to let go.

5. He is just like his dad. Seriously, it's a little alarming at times but it really is the most adorable thing. Those two are such buds already.

4. He is growing hair! This is the most exciting thing for me! He still looks bald because it's so blond and light- but it's there and it's AWESOME!

3. He found his feet- kinda. He's really into them sometimes and at other times, he could care less. But it sure is funny to watch as he tries to grab them and lift them, towards his mouth of course.

2. Brendan has learned how to blow raspberries. It has got to be the most entertaining thing in the world. He did it all through church today- which got many laughs. It never gets old. Stay tuned for a video.

1. He loves to be held by his mom. I love that he loves me. My favorite time is when he wakes up in the morning and just wants to cuddle with me.
Posted by Valerie at 9:07 PM No comments:

Usually Brendan reserves his big laughs for me but today, Chris got quite the response from him while holding him. It amazes me how much bigger his laugh has gotten since the first time he laughed. He can really get going and I think it must be the sweetest and cutest thing in the world- hands down, no doubt about it. So when he was cracking up at Chris, I had to snap a video of it. It's just too precious.

Posted by Valerie at 9:01 PM No comments:

I finally took a video of Brendan in his jumperoo and thought I would share it with all of you. It is seriously one of the funniest things I've ever seen in my life. What's even better is that he can do this for about 15 minutes before being done and wanting to get out. Enjoy!

Posted by Valerie at 9:35 PM No comments:

Brendan is such a hoot

Brendan is becoming quite the big boy. He's eating rice cereal like it's nobody's business and loving it. He's doing a much better job- he's even recognizing the spoon and opening his mouth in preparation for the delicious banana flavored rice cereal. It cracks me up while he's eating because if I take too long with the spoon, he starts to grunt and whine, but as soon as it hits his lips- he's all good. He also loves his Jumperoo. He giggles and smiles while he's in there- which makes me giggle and smile. Not to mention he bounces like he's a little cricket or something. He seriously loves it, which is great because it frees my hands for 15 - 20 minutes.
Brendan also wore shorts for the first time this week. They are still a little big on him since he's on the smaller side for his age, but that makes them that much cuter on him. It's been insanely hot here lately, with temperatures in the high 80's, so Brendan was in need of some cooler apparel. I laughed so hard though after I put these on him. They look like capris! He's such a dashing young man. 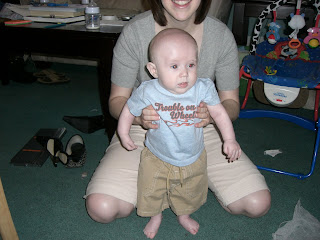