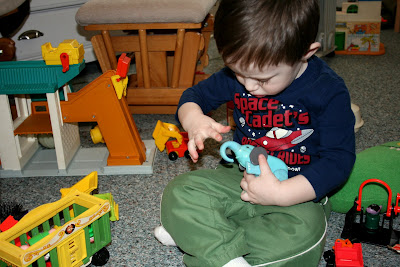 Boy am I glad that my parents gave us all these AWESOME Fisher Price toys that me and my siblings played with when we were young. We are definitely getting good use out of them since we rarely venture outside. Brendan loves playing with all the animals and little people. It keeps him occupied enough that I can get quite a bit done. Thanks, Mom and Dad! 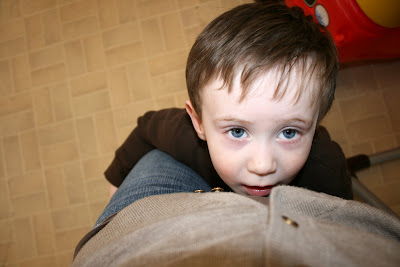 I couldn't resist putting this picture in. He really needs a haircut. I'll probably tackle that tonight. 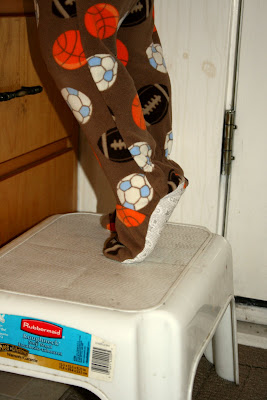 This is currently Brendan's favorite kitchen accessory- the stool. It's vital for me since I'm only 5 feet tall and now he has discovered that there's a whole new world up there that he couldn't access before. 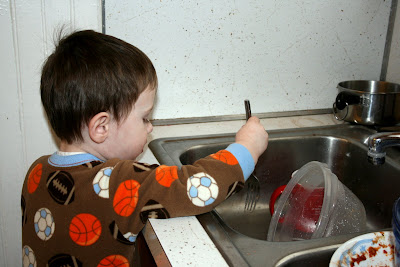 He mostly just loves to play in the sink, which has caused some problems. He has eaten a dirty sponge, tried to drink disgusting sink water, splashed disgusting sink water all over me and the dishes I just cleaned, and broke one glass. But he also got a sponge and wiped down all the lower cabinets for me so it's not all bad. :)

Okay, so I promised to post some pictures of our new town. Well, here they are. 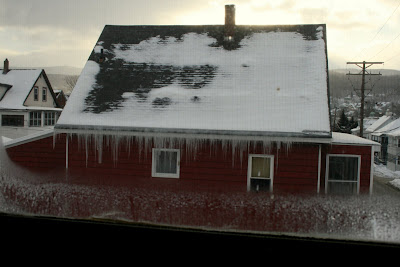 The most I can offer you are all pictures taken while in my house. It's just too dang cold and I'm a wuss. This one was taken from my tiny kitchen window. Can you believe those icicles? 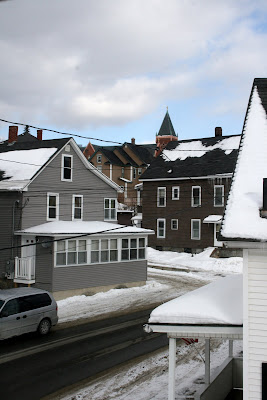 This is the view from Brendan's room. As you can see, most of the houses are built almost on top of each other in this part of town. We have no yard so I guess it's a good thing it's winter and we couldn't enjoy it even if we did have one. 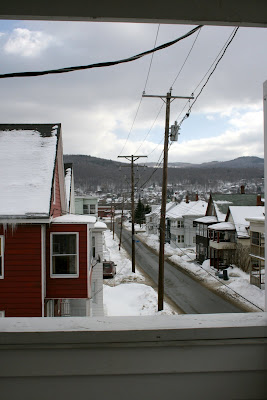 I did brave the cold for two seconds while I stepped out onto our porch to take this photo. That's as good as it's going to get. For now.
Posted by Valerie at 12:14 PM 2 comments:

We've been here in New Hampshire for a little over a week now and I would have checked in sooner but it wasn't until late yesterday that our internet could get hooked up. It was very difficult being without the internet for a week- I felt so out of it. But now we're up and running and it is slowly starting to feel like home, a little bit. I don't have pictures yet because the temperature has been less than inviting. Last week we had a blistery -39 degrees night. And since we've been here, we've had about 11 inches of snow. This past Sunday we only had one of the three meetings at church- they cancelled the last two due to the crazy snow that was coming down. The snow plow piles here are HUGE too. But we're getting used to it little by little.

So all I have to share right now are a few pictures of our drive out here. We were lucky enough to be able to stop and see both of our families on our way. The first stop was in Colorado and we actually arrived on Brendan's birthday so we had to have a little birthday celebration for him. 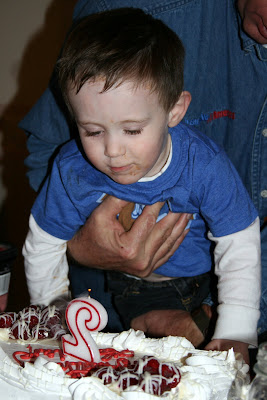 I can't believe he's actually 2. It's so strange to say that I have a two year old- how fast time flies. He loved his candle on the cake and blew it out all by himself. 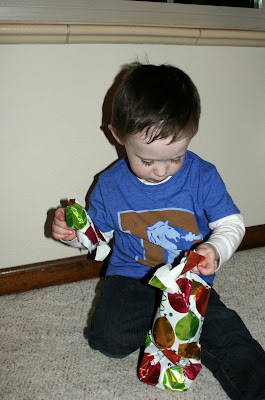 And of course he loved opening his presents! He had a fun time digging into them and then playing with them. It was a nice distraction for him after a couple days of pure craziness. The night before he learned that he could climb out of his pack-n-play and we learned that Brendan moves A LOT in his sleep. It was a long night for all of us and he didn't sleep well in the truck (but who would? It was so loud I had to shout to talk to Chris) so the festivities cheered him up and kept him busy.

We loved being able to spend time with Chris' parents but we had to keep moving and a couple days later arrived at my parents' house. Brendan had another birthday celebration and some whipped cream as a special treat. 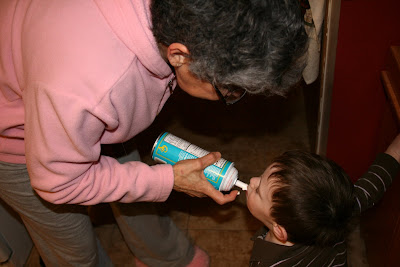 The great thing about my parents' house were the kitties. Brendan had so much fun chasing them and petting them. He had endless fun with Sam, who put up with a lot from Brendan. Brendan liked to pull his tail or his leg to get Sam to meow or hiss at him. He thought it was hilarious. 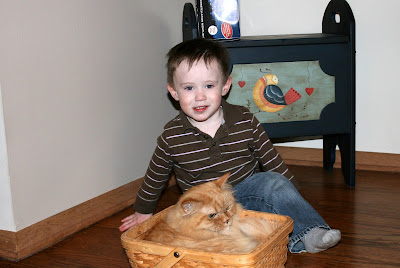 Maybe someday he'll be able to have a kitty of his own but I won't hold my breath. 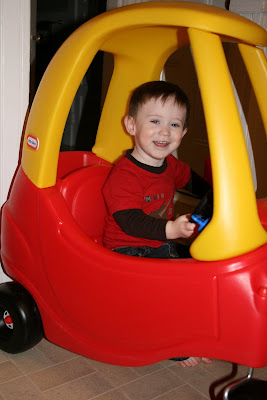 And this was our gift to our little man. It was a little late but he loves it. Luckily our kitchen here is big enough that he can ride around in it and get some good use out of it until the snow melts (which people here tell us won't be until late April!).

I promise to take some more photos soon and post them. It is so beautiful here and I'm excited to get my camera out. It's supposed to warm up to 21 degrees this weekend so if the weather cooperates, I'll have something to show soon!
Posted by Valerie at 12:20 PM 7 comments:

A Very Happy New Year to You

2008 was a great year and I'm hoping 2009 will bring just as many grand things for us and for all of you. This past year we had some momentous reasons to celebrate and some disappointing dips but I think we came out on top in the end. Here's a recap. Chris graduated with his Master's degree, I got to quit my job, Brendan grew and learned so many new things I can hardly name them all, we celebrated 6 years of marriage, house-hunted for a while, and just enjoyed life as it came at us. 2008 also brought some difficult times and decisions. Chris accepted a new job in New Hampshire after much thought/prayer/debate, we lost a baby, had dear friends move away from us, and found out we have to get Brendan some extra help for his speech delay. But through it all, we've had amazing support from family and friends, and most importantly the Lord. We've been greatly blessed and I would be ashamed if I didn't thank my Heavenly Father for all he has given us in the past year. We're looking forward with optimism to all that the new year has to offer and hoping that you have a wonderful year as well.

See you from New Hampshire the next time we check in!
Posted by Valerie at 11:14 PM 4 comments: