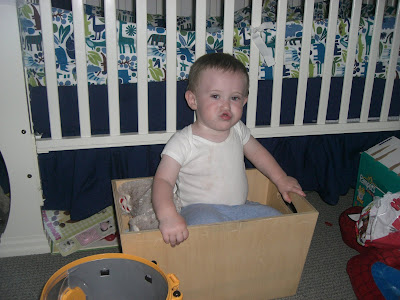 Another month has gone by and we're up to our normal shenanigans around here. Brendan has been keeping me busy but I'm still loving every minute of it despite some not so fun times. Like today, when he pooped on the floor in the living room. Luckily it was in the corner but it was probably the most disgusting thing I've ever had to clean. So gross. Now I know not to trust your son without a diaper- even for 30 seconds. He also took a wiz on the tv stand. I've learned my lesson. 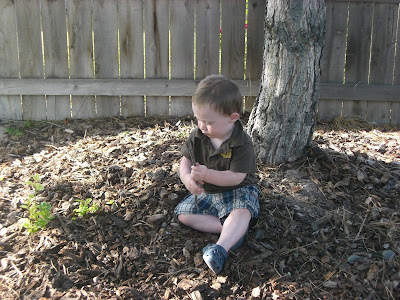 We spend a lot of time outdoors which means I have to keep a close eye on Brendan or else he'll eat the wood chips. His favorite is if he can find a puddle to dip them into and then slurp the water off of it. Again, very gross but I guess boys will be boys, right? 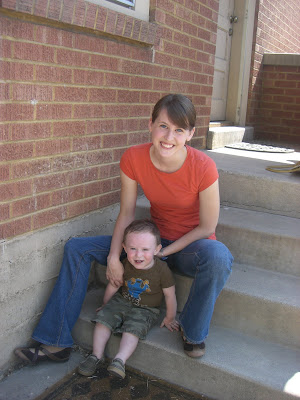 We also had to say bye for now to Angela and Jandon. They've relocated to Spokane, WA and both Brendan and I are going through withdrawals. Target will not be the same without you, Angela! 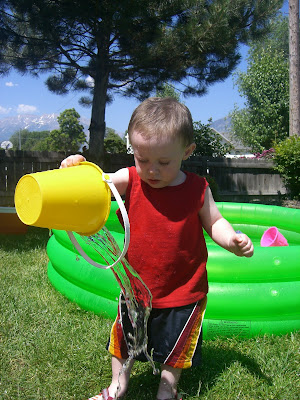 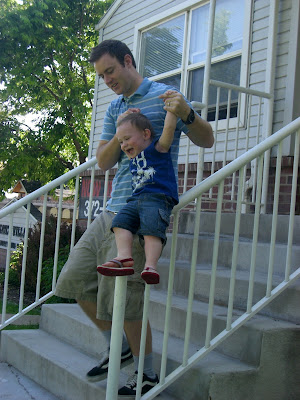 Overall, we're just enjoying the summer and watching Brendan grow. It amazes me how big he is getting and I can't believe that on July 3rd he will be 18 months! I don't know when the transition from baby to little boy happened, but it's hit me hard the last couple of days. But I honestly am loving this stage despite the tantrums and poop problems. Life couldn't be better.

And I should probably mention that Chris is really enjoying his job so far. I know I don't write about him as much as I should... He likes the company he works for as well the people, so it seems to be a really good fit for him. He also took the polygraph for the FBI on Wednesday, so luckily that is out of the way now. That wasn't so fun for him but he's glad it's over and done with. He deserves a big pat on the back for going through that! 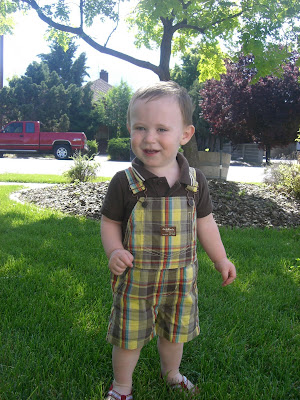 My mom got this adorable outfit for Brendan and I just wanted to show it off. I love the plaid! Thanks, Mom! 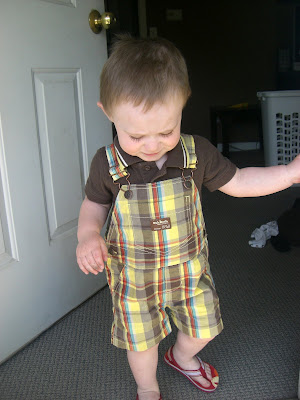 With temperatures in the 90's this past weekend, we decided that it would be a good idea to get Brendan a little pool to play around in to save me the hassle of finding a cute swimsuit. As much as I like the public pool with the great kid's swim area just blocks from our house, it's a lot easier stepping right out our front door. 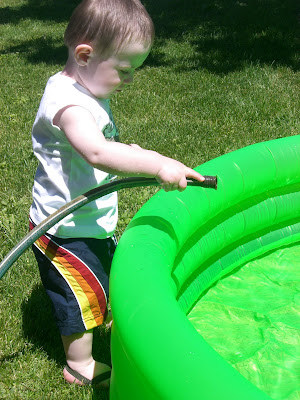 Brendan loved the hose and was very sad when Chris didn't let him take in in the pool with him. But he soon got over it. 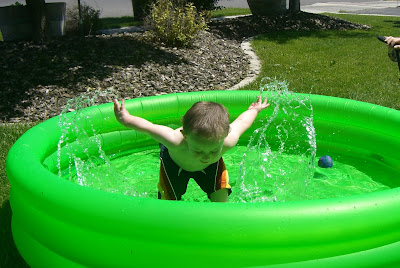 He splished and splashed away. He was in heaven. It was 20 times better than a bath! 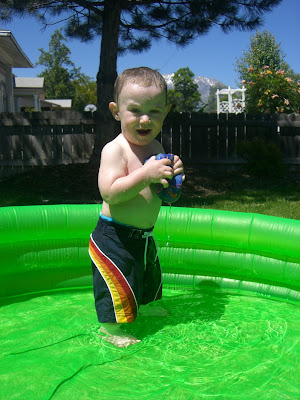 I bought him these little water balls from Target in the $1 area (my favorite) and he loved them. Although, I think he liked the plastic cup from our kitchen (not pictured) better. He's so easy to please. 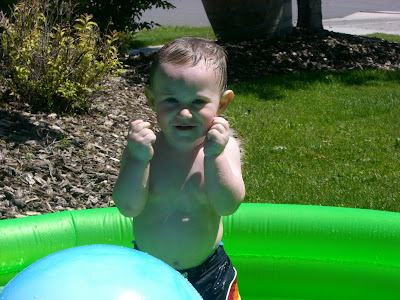 He loved every minute of swim time and even managed to not get sunburned- thanks to the SPF 50 we slathered him with. He seriously slept the best he's slept in a very long time. He didn't wake up until 9:00am the next morning! Yahoo! It's very sad that 9:00am in sleeping in for us but we'll take it!

Brendan was angry over something, I don't even remember what now, and he decided to do his classic throw-myself-on-the-floor-and-scream routine. It's so funny that I had to run and grab the camera, which didn't help him at all. He screamed louder once he realized I was not sympathizing with him. 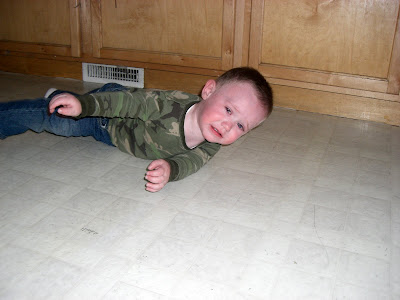 He has to look up to make sure that I know he's there and that he's not happy. 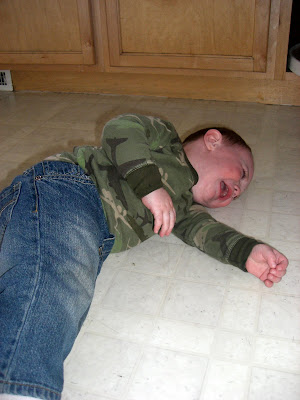 Then it's cry even harder and look extremely distraught. 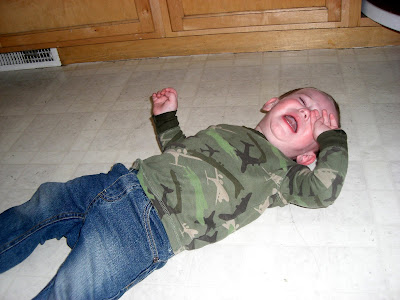 If that doesn't work, he adds some kicking of the ground (which he's doing here but you can't tell) to really get his point across.

After a minute of this, I finally consoled him and gave him a kiss- to which he pushed me away and ran off to play.

My first day being a stay at home mom pretty much, well, rocked! It was a great way to start off and I'm looking forward to the rest of the summer with Brendan. Here are some of the highlights from the day.

1. The park. Brendan is a pro at going down the slides. He flips himself around so he slides either head first or flat on his belly- and he loves it. He's such a little daredevil.

2. J Dawgs. There is this little hotdog hut right by BYU campus that has the most delicious hotdogs. Best thing is- they're HUGE! Oh, and super yummy. And they serve apple beer. Brendan ate almost a whole one by himself, so they've got his approval too. It was the perfect treat after playing hard at the park.

3. The Post Office. This really isn't a highlight but I was very annoyed with the USPS today. I love sending and receiving REAL mail, but waiting in the line at the post office really sucks. Especially with a 17 month old.

4. Brendan found a sucker of Chris' from his graduation candy stash, and quickly tore through the plastic wrapper to eat the sucker. I took off the rest of the plastic so he wouldn't choke and let him have at it for a little while. He was very upset when I took it away a few minutes later. But I figure the kid doesn't need too much sugar. 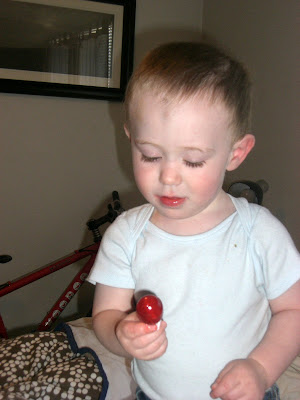 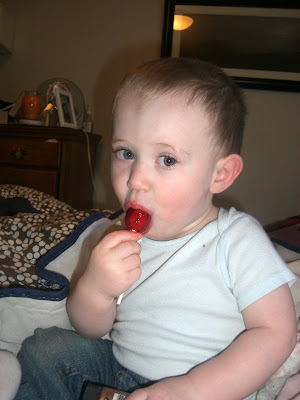 5. The harmonica. I found Chris' harmonica while searching Brendan's room for stray socks. All of a sudden, I heard Brendan playing it. When he's played with it in the past, he couldn't figure out how to make sound, but now he's a pro! 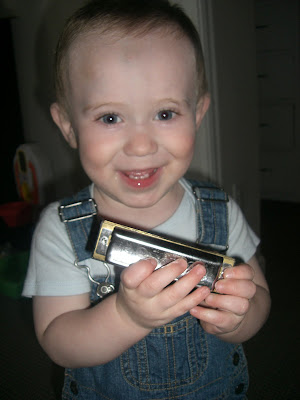 Enjoy the video!
Posted by Valerie at 8:25 PM 3 comments:

I Scream for Icecream! 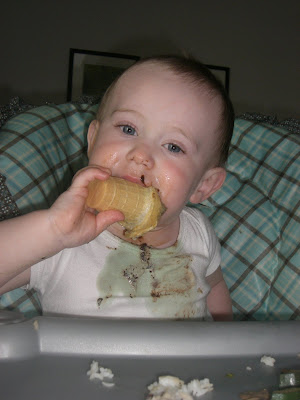 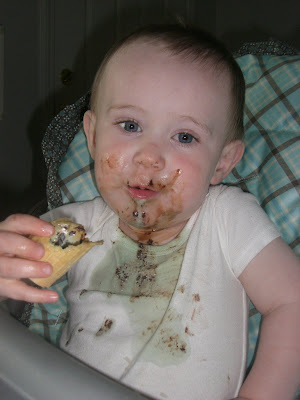 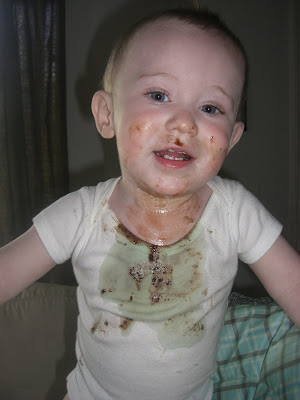 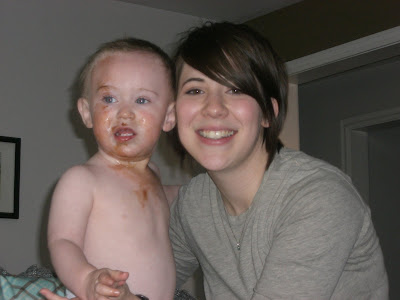 Brendan had his first icecream cone this past week and he loved it. I didn't doubt that he would but I didn't know what a mess he would make with it. We've stained so many onesies though, I don't even care anymore- plus it was hilarious to watch him.
Posted by Valerie at 7:46 PM 3 comments: