Groovin' to the music

Today, Brendan and I were rocking out to some music and the boy had the urge to dance. I'm glad that he danced long enough for me to get a video of it. And please excuse the bare chest in the first video... it was hot so I had taken his shirt off.

This white boy has some pretty great moves! And this time he has a shirt on. :)

After a fun week in Spokane visiting the Mitchell's, Brendan and I are home again! Spokane is such a beautiful, fun place... I'm jealous that Angela and Jandon get to live there. It made Utah look pretty boring and bland. I forget what it looks like to have trees everywhere. The color green is so pretty. 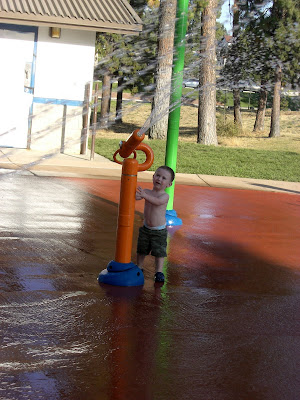 There was this great splash pool near their home, so it was great to take Brendan to and let him blow off some energy. He loved it! I wish we had one near us but now that summer's over, I guess it doesn't matter so much anymore.

Angela and Jandon also took us to see the heart of the city of Spokane, which is very child-friendly. They have this old historic merry-go-round and Brendan and I took advantage of it. It went a little faster than I would have liked but at the end Brendan was clapping and saying "yay" so I think he liked it more than I did. 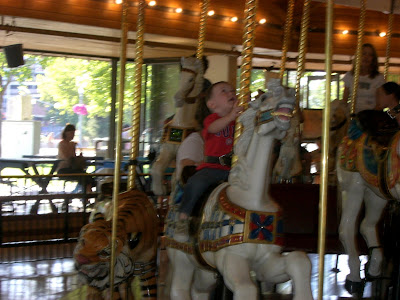 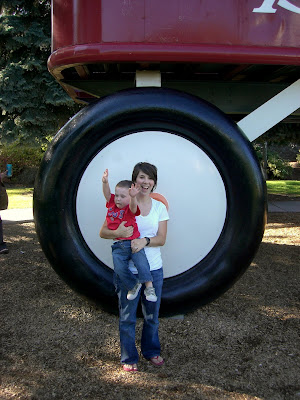 The city also sports an amazingly HUGE Radio Flyer Wagon that is actually a slide. Brendan probably could have played on this all day if we would have let him. It was hard to get him to pose in the picture above because he wanted to get on the slide so bad. 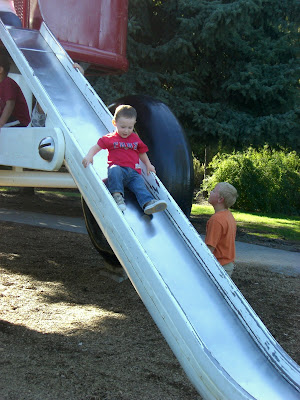 He wasn't scared at all and rode down the slide like a pro! 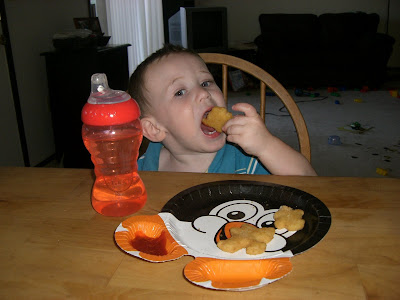 We had so much fun and Brendan behaved himself surprisingly well. He even sat at the table and ate his lunch like a big boy. Brendan's favorite part though was the garage door. The video is hilarious and he seriously did this every time we opened or closed the garage. Thanks for having us, Mitchell's! We'll have to come visit again soon! You better keep practicing at MarioKart for some re-matches! 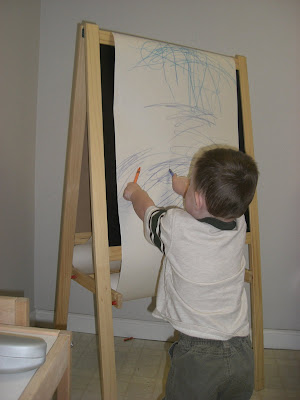 Brendan has been getting lots of use out of his easel and crayons lately, now that we finally set it up for him. :) It's one of his favorite things to do and I must say I'm very glad. I love to be creative and I hope my little guy will to! 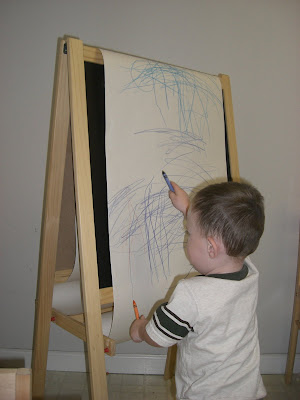 Here he's got the two-crayons-at-once action going on. So sweet. 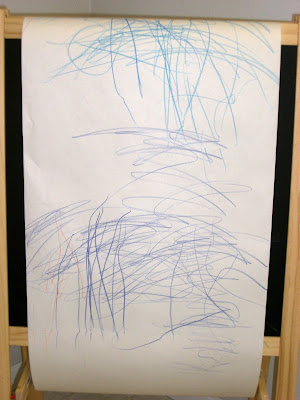 And his lovely artwork. I'm so proud of him. It's not much but to me, it's a masterpiece! 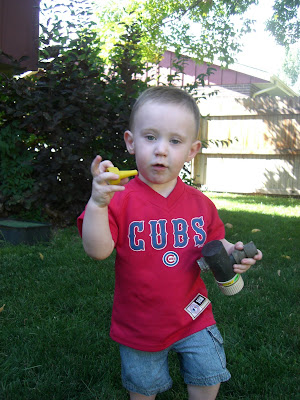 And I'm just throwing this picture in here because I love it. Brendan's a Cubs fan at heart, even if he doesn't know it. Thanks Mom and Dad for getting this for him. Now if only he we wearing it in Chicago... I think everything would be perfect then.

I'm off to Spokane to visit my bud Angela, so the blog will be quiet for about a week. Unless Chris amazingly decides to blog (he's staying behind to be a bachelor while Brendan and I are gone) but he won't. But I'm sure I'll have LOTS to tell when we're back. Wish me luck on the flight!
Posted by Valerie at 12:56 PM 3 comments: 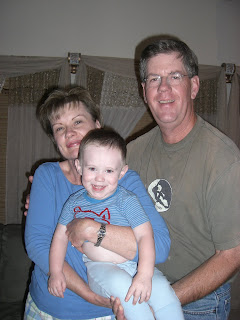 The first weekend, as referred to in the above title, took place in Colorado. For those of you unfamiliar with this state, Colorado is one of the "four corner" states bordering Utah on it's east side. Colorado is the centennial state as well as the "mile high state" because it's capital is located 5280' above sea level. For those of you unfamiliar with the ratio of feet per mile, there are 5280 feet in a mile. Now, much of what we currently know as Colorado was originally part of the Louisiana purchase. Since the time Colorado became a state nothing much has happened in it's history worth noting, that is until recently. You see, two weekends ago Brendan visited the state for only the second time in his life. This time Brendan could run. Colorado wasn't really prepared for the beating it took from the constant pounding of Brendan's feet, especially when he was wearing his heavier shoes. He inflicted punishment on every square foot of land he was allowed to run over and some parts he wasn't allowed to be on. Fortunately for the bodies of water, we didn't allow Brendan to terrorize them, although he desperately wanted to jump into every pond or stream he came across. At one point we were at a scenic view stop and we got out because Brendan had just thrown up. Well, there was a steep hill and a barbed wire fence and some railroad tracks between Brendan and a lake. Keep in mind that Brendan had just thrown up, but he didn't care and it took all of mine and Valerie's strength to keep him from getting to that lake.
Moving on. Brendan loved being at his Grandparents home. He gave out lots of hugs. We are a little worried because a good percentage of those hugs were to strangers that none of us had ever seen before. Brendan sees the good in all.
On our trip we got to see Peter and Katie Sabey and their kids. We also got to see Scott Fatberg who has been exiled in Texas the past couple of years. We also got to see Aunt Jan who is doing quite well.
We also went to a picnic where once Brendan saw the lake there we just spent the whole time keeping him from jumping into it. Other kids there amused themselves by spitting on the ducks. At least Brendan wasn't doing that. Valerie wanted to spit on the ducks too, but I told her if she did the ducks would bite her, so she didn't do it.
The trip was good. It was good to see family and friends and it was a nice break from the usual. 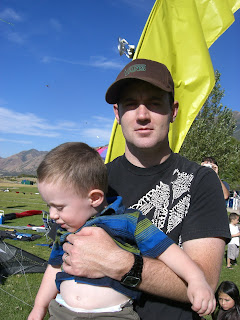 This next picture portrays me trying to get Brendan's belly more tan. He's been complaining that it is just too white so we went up to higher elevation to catch some good UV rays for him. When he was done, we tanned my stomach too. It just so happened that the place we chose to tan ourselves at also happened to be the location of the first annual "wind days" of Spanish Fork. It was a kite and wind festival celebrating the 9 huge windmills they just installed at the mouth of Spanish Fork canyon. So we checked out some giant kites and walked around the hills a bit. We went with Zach and Amber Parry along with their kids Cadence and Murdock (Amber will kill me for writing this, but something inside me just can't resist. Murdock is actually the middle name. His first name is Jack). Anyway, the festival was fun. 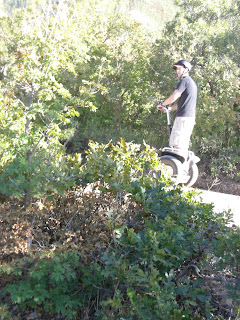 The last photo on this post is a picture of me with wheels for legs. If I were a cyborg I would definitely want to be upper-half normal human, and bottom half-segway. One of the features of the kite festival was an area where you could ride a segway. Seqways are by far the lamest form of travel ever known to man (the lamest form until they invent side cars for the segway), but it is a pretty cool machine. There was really no organization to the event. Someone showed you in about 30 seconds how to ride it and then you had to weave between the crowds as you learn how to control it. I almost hit a few pedestrians and felt like I was going to crash a few times as well. Luckily I didn't break it and I didn't run anyone over, although that would have been a pretty funny sight. Valerie was kind enough to chase Brendan while I drove it, but then she was too tired from chasing him to test ride one herself. Maybe for her birthday I'll surprise her with her own segway and a side car attached for Brendan to ride in. They'd love it.
Two weekends, one post, just like I promised.
Posted by Chris the hiss at 1:12 PM 4 comments: 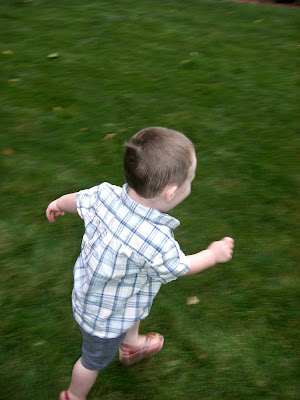 This pretty much sums up what the long holiday weekend was like for Brendan. Constant motion.

We got back in town this evening and we'll give an update soon but we're going to take some time off to get things back on routine! Hope everyone had a lovely holiday!

Posted by Valerie at 9:00 PM No comments: