This past Saturday we decided to head out to "Draper Days" and check out what our new town had to offer. We all had a blast despite the near 100 degree weather. 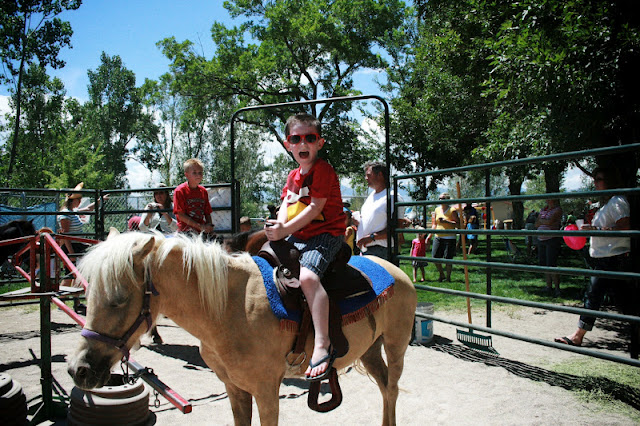 Brendan got to ride his very first "horse" or in this case a small pony and he totally loved it. When he climbed off, he declared "I'm really good at riding horses." So true. 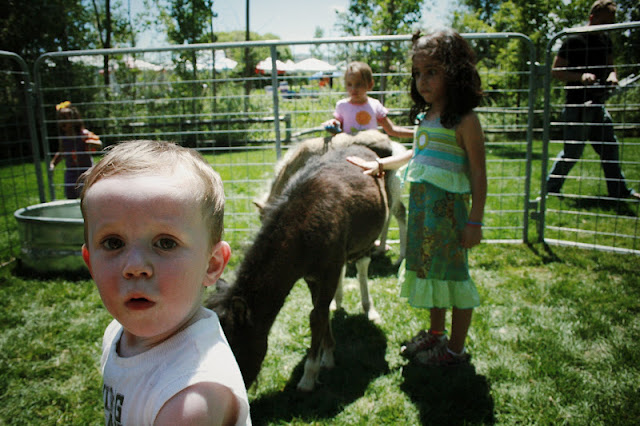 They also had a small area set up where the kids could pet and brush even tinier ponies, which I thought Alex would love but weirdly he didn't. 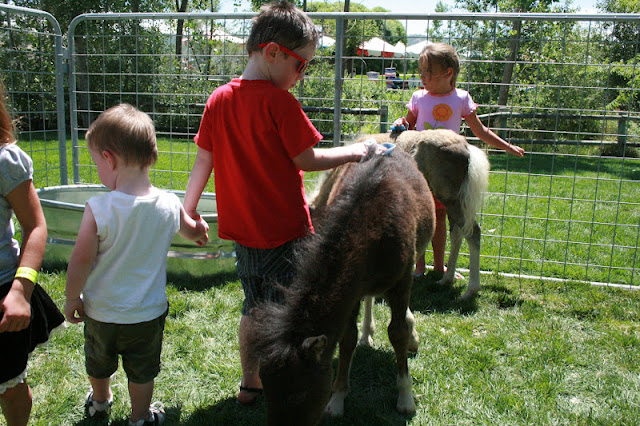 Brendan tried to help him out and showed him what to do but still, Alex didn't want anything to do with them. Turns out Alex just likes to get excited and scream about seeing animals but not actually touch them. 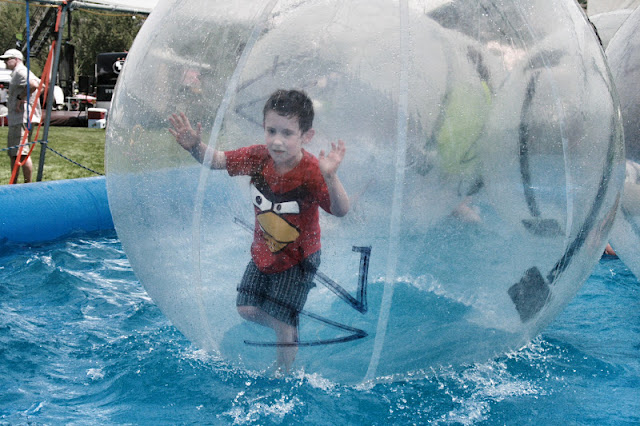 We forked over some money for Brendan to try out "walking on water" and, no surprise here, he was stoked about it. He had a blast trying to walk around in that giant ball. 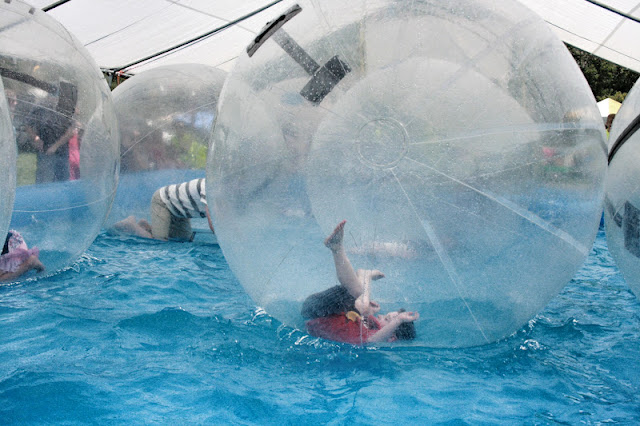 Most of the time, he ended up falling and laughing the whole time. He finally gave up trying to walk and just started doing somersaults inside it. That made me laugh and it was totally Brendan's style. 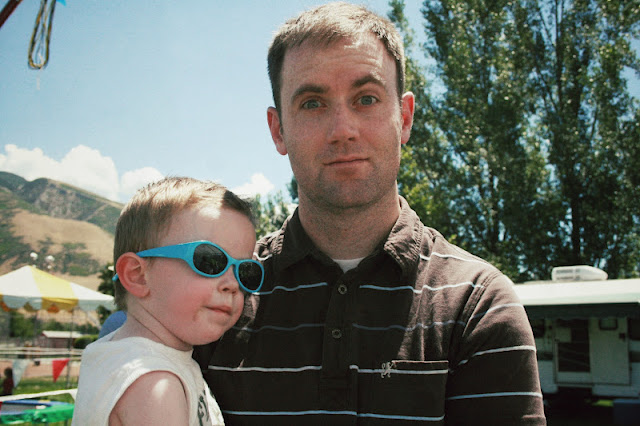 It was so stinking hot out and of course Alex wanted to be carried a lot versus sit in his stroller so Chris was kind enough to deal with him. (Why must Chris always make strange faces when I'm trying to take a picture of him?) 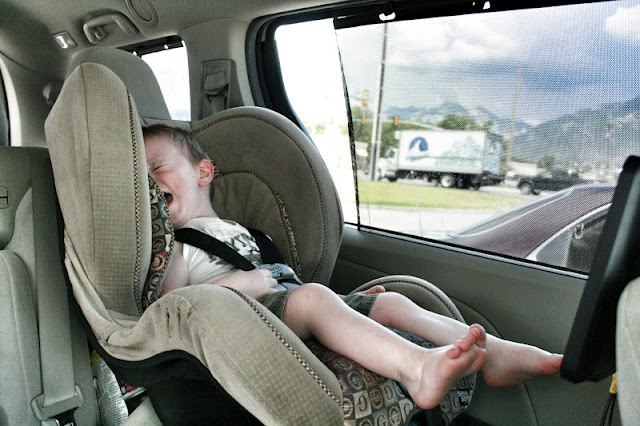 I finally couldn't take the heat anymore and it was past naptime so we decided to head home. We had to literally drag Alex out of a bouncy house screaming and kicking the whole time, which continued on the way home. He sure did sleep good though once he was in bed.

So Draper Days gets a thumbs up from us. We are really enjoying living here and I love that there's so much to do and we're trying to pack it all in before Brendan has to start school in about a month. It's still crazy to me that Brendan will be in school soon. How did time go by so fast!?!
Posted by Valerie at 7:38 PM 1 comment:

I finally ordered a new battery and battery charger set for my camera and they arrived in the mail yesterday, which means I can take pictures again and start blogging a bit more (hopefully). I busted out the camera last night and it felt so good. 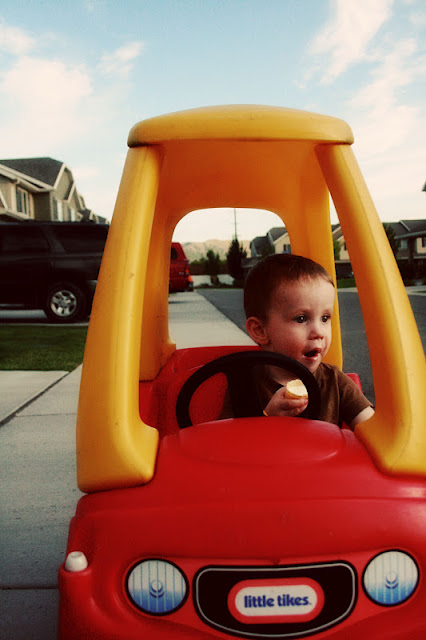 We headed out to McDonald's last night for a quick treat of ice cream cones and Alex was in heaven. This boy LOVES his sweets and treats. He even ended up stealing the last bit of my cone and taking off with it, the little thief. 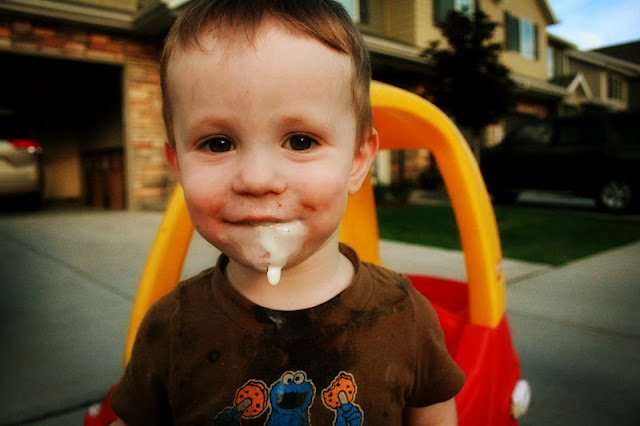 Dirty, as always. I can't keep this kid clean. It's impossible.

The weather here was beautiful last night so the boys busted out the bike and Brendan was sweet enough to let Alex take a turn. We really need to get Alex a bike or something because he is so jealous when Chris and Brendan get on their bikes for a ride. His little plastic car isn't cool enough for him anymore. 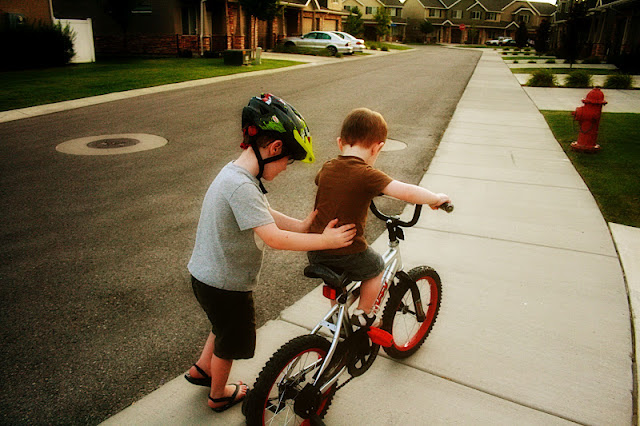 I love when they play sweetly together, which honestly doesn't happen enough in my opinion. There's a lot of screaming (on Alex's part) and yelling (on Brendan's) and crying (both of them). But I know they love each other and in time, things will get better. Right???? 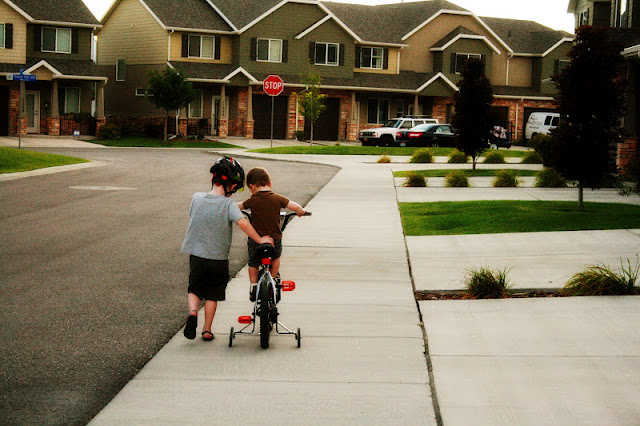 Brothers, they're the best.
Posted by Valerie at 10:21 AM No comments: